July 23rd, and we're back in Omagari. The funny thing about this kind of training is that on the first day or two you sometimes wonder how you're going to make it through an entire week of heat, sweat, blistered feet, and spent bodies. Then a miraculous transformation occurs, invariably without you knowing it, and by the end of the week you're feeling strong and confident and actually feeling sad that this is the last day for another year.

Quite a few will be going on to Sasebo to the JKF Gojukai seminar, shinsa (grading), and the All-Japan Goju-Ryu Championships. But many won't and I'm sure they always feel like they're leaving prematurely. The last day always seems to enhance the feeling of camaraderie that has been building between all of us through the sweat, the fun, the beers. The last day is also the day of the Seiwakai shinsa and a fast and furious day of review, a microcosm of all we've been focused on during this year's training. 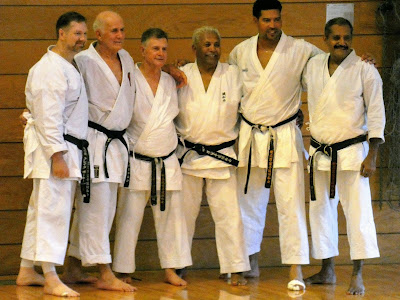 I won't give a blow-by-blow of the training day, because the pattern has held pretty true all week.  It was plenty hot, I'll say that. We ended near 3:00 pm because there were 29 karateka scheduled to grade, but of course, before we bowed out, we started at Sanchin kata and worked the entire Goju-Ryu kata syllabus through Suparinpei. Always when you think it is finished, it isn't! We were pretty soaked by then. See the above photo!

I was on the grading panel, all of us 7th dan except Vassie Naidoo Sensei and Seiichi Fujiwara Hanshi, who are 8th dans.  The 29 candidates were grading from 1st to 8th dan, so we observed all levels of experience and most were very impressive. In the lower yudansha ranks, some who were not as impressive in kata, were very impressive in kumite, or vice-versa. Of all of them, my unscientific observation was that the 5th and 6th dan candidates were most impressive, but the shodans were the happiest by far.  It pleases me to know there is an entire new guard of karateka who are moving up the Seiwakai ladder and who will no doubt assume future leadership roles. Kudos to their instructors! I know we are in good hands in the future. 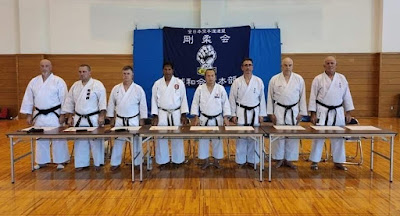 And congratulations to all of you who passed!

Then it was back to the ryokan to soak our aching bodies in the sento bath and enjoy another fine dinner. There was a wee bit of toasting to Fujiwara Hanshi and our Seiwakai family. Some were leaving early tomorrow morning to all points of the globe, or heading for Sasebo. The professionals among us decided it was a good night for one last get-together downtown. Tomorrow is a travel day, which means you can sleep on the train or plane. 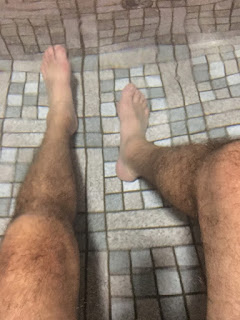 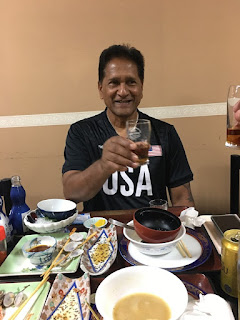 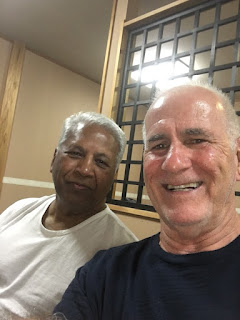 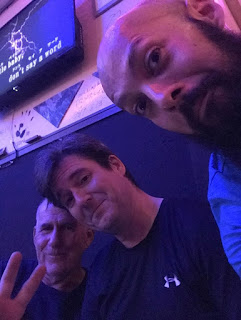 Last night! And that's a wrap!